Most industrial products have one thing in common: the best come from Germany or Japan. In Germany perfection thrives from the combination of striving for the highest quality, multiplied with strict design requirements. Those requirements are once conceived by Bauhaus. For example: form follows function. After the failed frivolous computer designs with pastel colors, the designers at Apple chase to implement the Bauhaus rules. After that they produced leading products as the MacBook Air and the iPhones.

Japan has mastered the art of copying fountain pens

Whilst making new products, having ideas is of great importance. This is the biggest problem Japan is facing. Japanese perfections stems from striving for the highest quality, in which the Japanese might even be better than the Germans. The problem lies in the originality of the ideas. But the Japanese turned this problem into strength, the Japanese became masters of perfect copies. Once the Japanese took the most of their inspiration from China, but in the 20th century they turned to the west. This is definitely also the case for the fountain pens. The most copied fountain pen model is the 146 by Montblanc. You could say that the market gets a bit monotonous, and with the black version this definitely is the case. Luckily there came something beautiful from this weakness. The Japanese started painting their fountain pens. Agreed, they use techniques copied from China, but the result is mesmerizing. The lacquered versions and mostly the hand-painted versions belong to the best, prettiest and artistic fountain pens in the world. And this automatically makes them the most expensive fountain pens in the world.

The Sailor 1911 that I’m describing her is the see-through version of the demonstrator RT. After a lot of black fountain pens it occured to me that I should buy something fresh and new. This also gave me the opportunity to see if these Japanese fountain pens are actually that good. The Sailor 1911 is indeed great. Sometimes my hand thinks that I’m holding a Montblanc 146, but made from a different material. The shape is almost identical to the Montblanc, and with that the 1911 is fantastically shaped. It fits well into my hand and the rifling doesn’t irritate. The 1911 is great to write with when the cap is attached, but even without the cap the balance of this fountain pen is great. The pen is a lot lighter than the Montblanc 146 though. The Japanese manufacturers also have fountain pens with a 149 width. To write with those pens you really have to like that. For me 149 width is not a personal favorite. 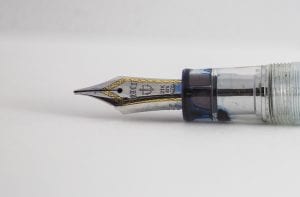 The nibs for the Sailor fountain pens are available in a lot of different shapes and sizes. Warning: Most Japanese manufacturers have a slightly finer nib than you might be used to. If you would normally order a Fine nib, it could be better to buy a Medium nib. Most nibs that are sold in the west are well-made and sturdy. They are perfectly suited for daily use and writing your signature. For calligraphy you really need to order some special nibs.

Filling system for the Sailor 1911

The Sailor 1911 fountain pens use a cartridge filling system. You can also use a converter for these fountain pens. I took apart the cap to make the beautiful nib more visible. I removed the inner cap so I can see the nib better when the pen is closed.  My personal experience is that it’s better not to do this because the pen now dries out constantly. The clip is fine, you can carry the fountain pen around in all possible ways. If this pen drops to the ground you have a slightly larger chance that it’s still in one piece. Montblancs on the other hand are known for breaking relatively quick.

Albert is a Dutch collector of fountain pens, and everything to do with them. He is a real "penthousiast". Next to that he lives with his family in the Netherlands in a quiet part of Noord-Brabant. He spends his spare time writing for this blog (not with a fountain pen unfortunately) and reading books.

Back to Top
Close