Kaweco is a very old fountain pen brand. Kaweco originated from the Heidelberger Federhalterfabrik, founded in 1883. From there, merchants Heinrich Koch and Rudolph Weber founded the Heidelberger Federhalter-Fabrik Koch, Weber & Co. at the end of the century, which would later make Heidelberg the centre of the German fountain pen industry. From this the Kaweco we know today originated.[/vc_column_text][/vc_column][/vc_row][vc_row][vc_column width=”1/2″][vc_single_image image=”2856″ img_size=”full”][/vc_column][vc_column width=”1/2″][vc_column_text]

The nibs made by Kaweco 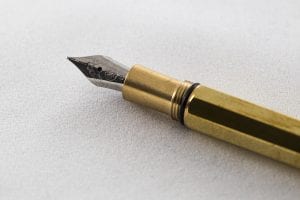 The history of Kaweco 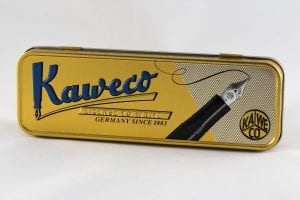 What you often see in fountain pen brands is that they have a rich history of success followed by gradual decline. Often there are several rescue attempts that (depending on the time and production plans etc.) are successful or unsuccessful. But illustrious brands remain commercially interesting. Kaweco probably tops the list with the number of rescue attempts over the years. As early as 1929, the factory went bankrupt for the first time, as well as in 1970 and 1982. But time and time again the name was revived and not without reason. Earlier I wrote enthusiastically about the Kaweco AL Sport which was first made in the 30’s, only because of that perticular fountain pen it is nice that Kaweco still exists.[/vc_column_text][/vc_column][/vc_row][vc_row][vc_column][vc_single_image image=”2666″ img_size=”full” alignment=”center” style=”vc_box_rounded” onclick=”custom_link” img_link_target=”_blank” link=”https://www.lacouronneducomte.nl/luxe/?tt=2387_12_284090_&r=%2Fwebstore%2Fmain%2Findex.php%3Flanguage%3Den” el_class=”bannerbreed”][vc_single_image image=”2714″ img_size=”full” alignment=”center” style=”vc_box_rounded” onclick=”custom_link” img_link_target=”_blank” link=”https://www.lacouronneducomte.nl/luxe/?tt=2387_12_284090_&r=%2Fwebstore%2Fmain%2Findex.php%3Flanguage%3Den” el_class=”bannersmal”][/vc_column][/vc_row][vc_row][vc_column][vc_column_text] 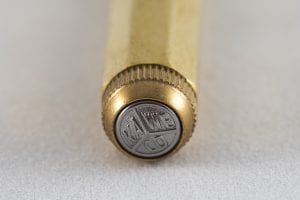 It is clear that Kaweco is inspired by its own past. The Special has an octagonal minimalist design. The pen is very thin and is made of brass. I myself once bought a black one once, which I found difficult to write with. That is unusual, because Kaweco’s usually write exceptionally well. Even the very cheap Sport versions normally write very well. This Special with a steel nib also writes well. Value for money I would say. In addition, with the Special Massive Brass you really have a special pen. The only disadvantage of this pen is the fingerprints that are left on the pen. This is clearly visible on the pictures. Isn’t that a problem? Then this is definitely an eyecatcher![/vc_column_text][/vc_column][/vc_row][vc_row][vc_column][vc_column_text]

Our thoughts on the Kaweco Special Massive Brass 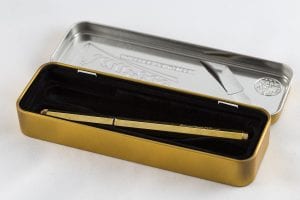 This fountain pen is one of the longer fountain pens I know, with 14.2 centimetres in length and 12.2 centimetres without a cap. When writing you can screw the cap on the back. The Kaweco Special Massive Brass will then be truly long with 16.8 centimeters. Because the pen is very thin I do not really like the grip. There is not much room for your fingers. Especially because of the weight of this solid brass fountain pen that can be a challenge. But if you go for vintage then this fountain pen is a must, just like its old predecessors, the Kaweco Special Massive Brass also doesn’t have a clip on the cap.[/vc_column_text][/vc_column][/vc_row]

Albert is a Dutch collector of fountain pens, and everything to do with them. He is a real "penthousiast". Next to that he lives with his family in the Netherlands in a quiet part of Noord-Brabant. He spends his spare time writing for this blog (not with a fountain pen unfortunately) and reading books.

Back to Top
Close